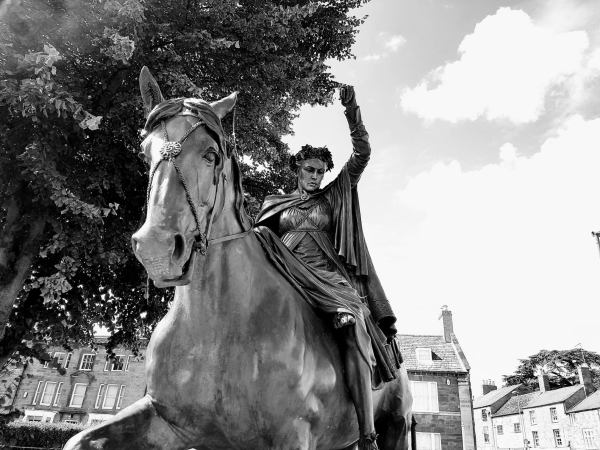 I have the entire story drafted. Came in a bit heavy at 5742 words. Beginning today at noon and for the next seven days, I’ll revise, edit and re-write. One week left to polish the uncut stone into a gem worthy of submitting.

And now for the conclusion:

Siobhan held her eyes closed for a moment as hot tears ran down her cheeks. The sniffed and rubbed her nose. Her heart fluttered when she heard the soft applause and she looked around to see the Elders and the Archdruid nodding and clapping. The white-haired Elder gave her a wink and pumped his fist. Dhoul lowered his head and whispered to her.

“Did we make friends?”

She leaned into him and said, “Maybe. But first, you have to finish your meal. I’m not hungry and we shouldn’t let it go to waste.”

Dhoul hesitated not and slurped up the wet sheep remains. Through the bowed entry of the grove came two boys pulling a heavy cart, inside it a massive, multi-hued chain, on one end Siobhan could see a dragon-sized manacle. Her brow furrowed and her eyes shot wide open. She looked to the Archdruid, mouth agape. He shook his head and said the boys,

“Leave it. I don’t think we’ll be needing it after all.” He smiled at Siobhan. She barked out a laugh that twisted into a cry and she clamped her hand over her mouth again. She flung her arms around Dhoul neck and said,

“We did it.” She nuzzled her face into his neck. “You can stay.”

“For now.” said the Archdruid.

Thank you, she mouthed to the Archdruid and wiped her face.

“In the matter of the dragon called Dhoul.” began the Archdruid. “Let the Circle speak their judgment. Welcome or no?”

“Failte.” said the first of the eight.

“Failte.” said the second and so on around the circle until finally, it was the Archdruid’s turn to speak.

“I see no reason why this creature should be cast out. However, you and he both will make amends to the Rodagh family and to the village at large. You will bear the burden of the victim’s children and their children for as long as you are able.”

“We agree,” she said. “And furthermore, I will demonstrate for you a contingency in the event of another accident.” She looked into the surprised faces of the Elders.

“This is not your initiation into Elder. You still have to wait for spring.” said the Archdruid.

“You’re going to want to see this and it may be useful to use prior to spring,” she said.

The Archdruid turned up his hands and shrugged.

Siobhan rummaged around in her pockets and retrieved a plump red grape. She popped it into her mouth, chewed slowly, and hummed a bit. She then lifted her voice in song. An ancient melody that captured the attention of all who heard it. The birds stopped chirping, the wind died down, the grove itself held its breath. As she sang, her voice became louder, resonant, and strong. Clarion. Dhoul head sagged and he settled down in the grass. He looked at her through one drooping eye and curled in upon himself and drifted off to sleep. An inward draft of air buzzed by her and swept the bloody hem of her robe toward Dhoul as he breathed. He exhaled and her robed slapped against her ankles the other direction. Siobhan walked to the center of the grove and held her staff aloft. She sang with the force of a thousand ancestors and Dhoul rolled onto his back and groaned. He wheeled a rear leg and snorted. Her song faded, yet Dhoul remained calm, sleeping soundly and softly snoring.

“Take that chain and cast it over the cliff,” said Siobhan to the boys with the cart and pointing to the boulder overlooking the lake.

Dhoul thrashed in his sleep, kicking and barking. The white-haired Elder laughed and smiled as he watched Dhoul sleep. Dhoul thrashed again and the tip of his lance-like tail darted out and skewered the Elder. Dhoul’s tail retracted and flung the Elder’s body into the boughs of an ancient oak. The cracking of bones and tree limbs made Siobhan’s legs buckle and she fell to one knee, clinging to her staff.

“No,” is all she said as it all came undone. She let her staff fall to the ground and she shuddered in wide-eyed horror. Time slipped away along with her agency. She could only stand, unmoving, not breathing. Staring as they shackled Dhoul by his legs and around his neck. He still slumbered and offered no resistance, even when the tugged him through the grove, up the hillside to where the boulder overlooked the lake. She sobbed and clutched at her gut. Doubled over she heaved and wretched but produced nothing. Fear, sorrow, and futile rage ripped its way out of her in broken cries. She snatched and gulped for air but it would not come. Her vision swam, her ears went deaf, and her mind floated away from her body, watching the scene unfold as if it were happening to someone else. Then Dhoul began to rouse.

“Shh. Shhh,” she said and lifted her voice in song once more. His eyes fluttered and he fell back to sleep as the seven remaining Elders chanted and withdrew their curved knives. They wrapped the heavy chain around the boulder and made their blood sacrifices. The chain fused to the boulder and into Dhoul’s dark green scales. It wasn’t until they started to wedge heavy oak timber under the boulder and began to lever it off the cliff when Dhoul shook off his enchanted sleep and awoke to find his situation most dire. He looked at the chain, then to the boulder and down to the water below. Siobhan ran to him and pressed her face against his snout and wept.

“What is happening?” he said.

The ground beneath the boulder gave way and rocked toward the edge. She shook her head and failed to speak, managing only a hoarse croak.

“I am sorry,” she said finally. Dhoul looked again at the boulder and his shackle and when Siobhan saw that he understood, her heart shattered utterly and she collapsed into a fit of gasping sobs. Her anguish poured from her in gulping waves of silence and ragged screams.

Dhoul reached out and opened his claw. He stared at her and blinked, waiting for the plunge.

“No,” she whispered when she caught a partial breath. “No.” she shook her head and pulled her blade from her belt. She cast a glance around at the circle and at the levers forcing the boulder over the edge. She drove her knife into Dhoul’s claw and dragged open a wound. He didn’t flinch as black blood flowed from him. When her knife plunged into her belly she didn’t feel the pain but pressure. First in, then out as she gutted herself with her blade. Their blood mingled and swirled into a frothy torrent of reddish black. She vented all of her pain and rage into a prolonged scream that shattered the attention of all around her. The Elders pressed the hands to their ears to stifle the sound and the boys shrieked and flung themselves over the cliff to escape her keening. As she screamed, Dhoul rallied, jumped to his feet, and ripped off his chains. He grabbed Siobhan with his wounded claw and held her gently. Their blood continued to mingle and he pressed her close to him. She writhed and kicked until finally, she screamed.

“Show these fools the nature of pain.” Her voice came out deep and unfamiliar even to her. Dhoul set her down and lifted the boulder in one claw. He rolled his talons and crushed it to powder. The rushing intake of air when he drew a long breath made a shrill whistle and as he exhaled, blowing sand from his claw in a jet of scathing gravel, sand-blasting the skin from their bones. Red, wet skeletons where the Elders once stood now tumbled over the cliff. Siobhan gripped her staff and thrust it out in front of her and as she chanted, red mist swirled and gathered. It coalesced and hardened into a bloody red crystal now topping her staff, glistening at the tip, like a plump red grape.

Siobhan clutched at her belly with one hand and leaned on her staff. Dhoul lifted her off the ground and set her on his back and leaped into the air.

“I will show you, you shall have your bounty. I will bring to you flavors, such delicacies like you have never known.”